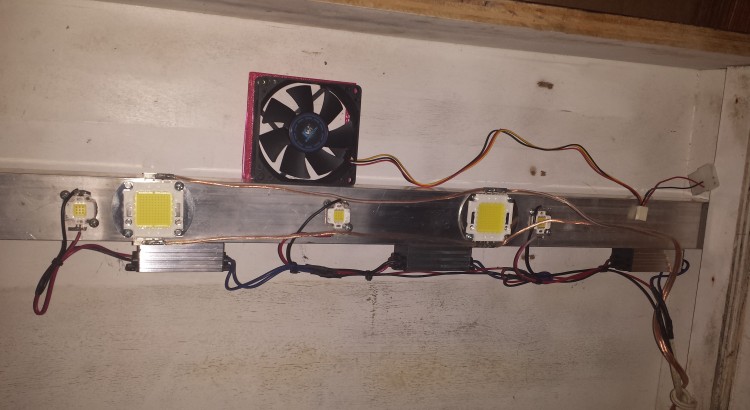 I’m planing on running mine at less than 200 watts probably 100 watts max. If you want to run this at the full 200 watts I would suggest getting a wider heat sink. The DC to DC boost converter has adjustments for both voltage and amperage so this gives you a great deal of control over your light. Simply adjust and monitor your plants growth.

This is really easy to do so follow the instructions from this guy. My only notes on this are that I just used a wire to jumper the two pins, rather than the resistor and have never had any issues with it. Also you may ask yourself 100A is that really necessary? No its not at all but the design of this should allow for very quite operation under a load of say 1/10th its power. I use mine to power my 3d printer and RC charging gear and have yet to hear the fan speed up at all.

Wiring on this is supper simple just wire up the +12v from the psu to the plus side of the input. Same goes for the negative. Then wire the leds in parallel and hook them up to the positive and negative lines of the boost converter. Of course leds need to be hooked up right way round so positive side of the leds goes to the positive output terminal on the boost convert, same goes for the negative.

The only other wiring you need to do is to wire up a couple of 12v computer fans to the input side of the boost converter. Note that if you decide to use a different psu, say a 24v one then you will need to wire in a step down converter for the fans to run off of. I used a couple 80mm 30cfm fans and one will do it but I’m running two as this gives some redundancy. This way if one fails the leds wont burn themselves out. If I had to do this again I would probably use 120mm fans as they would be quieter.

Hello. I am Mike Ashcraft, a web developer and tinkerer. This is my little chunk of the web. If your local you can some times find me on the W8WRP amateur radio repeater. My call is K8DAD.

Technologies I work with